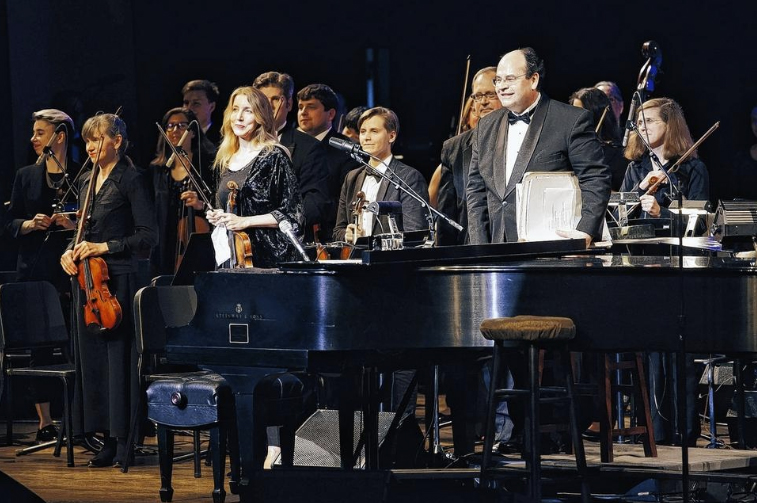 The New Albany Symphony Orchestra stands after the 10th-anniversary season finale May 6, 2018, at the Jeanne B. McCoy Community Center for the Arts in New Albany. The symphony orchestra could add some outdoor concerts after an amphitheater is built near the the McCoy, according to executive director Heather Garner. – COURTESY OF THE NEW ALBANY SYMPHONY ORCHESTRA

As plans progress for an amphitheater near the Jeanne B. McCoy Community Center for the Arts in New Albany, potential cost savings on the design are being explored, according to Craig Mohre, president of the New Albany Community Foundation.

The community foundation plans to break ground on the project this year, Mohre said. No timelines have been estimated because the design still needs to be finalized and a contractor must be selected, he said.

The goal is to look for opportunities to reduce costs without sacrificing important design elements, he said. Examples include the size and scope of the amphitheater’s support building and perhaps installing lawn seating instead of tiered seating, he said.

“Progress is being made with the design,” Mohre said.

Progress also is being made with funding, he said.

Mohre said the foundation has $4.5 million in commitments for the amphitheater, which is expected to be named the Charleen & Charles Hinson Amphitheater in recognition of the Hinson family’s $500,000 donation.

He said the project is estimated to cost $5 million to $6 million, but a more specific cost estimate would not be available until the design is completed. The architectural drawings are about 30 percent complete, he said.

The amphitheater will be designed to seat 800, and it will have a similar capacity and stage size as the McCoy so it could accommodate a full symphony orchestra, he said.

The amphitheater will be west of the McCoy, 100 W. Dublin-Granville Road, in a field adjacent to the New Albany-Plain Local School District campus.

The architect working on the project also designed the McCoy, Mohre said.

Patrick Hyland Jr., senior architect with DLR Group, said the firm is trying to address the functional needs of the facility and prioritize key aspects.

From a performance standpoint, that means the facility requires a stage that can accommodate multiple uses, such as popular and orchestral music, a dance performance or a Memorial Day ceremony, he said.

Operational aspects follow, and they include restrooms and concessions, and the means for the performers to access the stage, he said. Functional aspects, such as lighting and sound, also must be considered, he said.

Another integral part of the design is audience accommodations, Hyland said.

Multiple seating options will be included, such as a flat, lower area near the stage, a sloping lawn and an area behind that with tables and chairs, he said.

As the design of the amphitheater has progressed, it has been shared with community “stakeholders,” such as the New Albany Symphony Orchestra, Mohre said.

Heather Garner, executive director for the symphony orchestra, said the draft designs she has seen are “absolutely stunning.”

The amphitheater design is intimate and friendly and could serve as a space for families to connect and socialize in a relaxed outdoor atmosphere, she said.

With a potential summer home at the amphitheater, symphony orchestra members have been brainstorming ways to extend the orchestra season into the summer, Garner said. For example, she said, an Independence Day concert could be scheduled.

She said her dream would be to hold a summer music festival in New Albany that would extend a week or two weeks, feature visiting guest artists and showcase community arts groups.

“New Albany is a community that is rich in collaboration,” Garner said. “Together we are all stronger, and I anticipate this new outdoor space will open up multiple programming possibilities for organizations to create and thrive together.”

The construction of the amphitheater is not the only change in store for the Dublin-Granville Road corridor.

The city’s revitalization effort for Rose Run Park and the Rose Run stream corridor is underway.

Components will include a pedestrian bridge connecting Market Square to the New Albany-Plain Local School District campus and a modification to Dublin-Granville Road that will reduce the width of the road and add more room for cyclists.